HomeJesus ChristThe Deity of Christ. The Father over the Son.

Question: In 1 Corinthians 11:3, what does it mean when Paul said, “the head of Christ is God?” Does it reject the deity of Christ – that He is not God?

Answer: This verse is a classic citation from which a supposedly strong objection against the deity of Christ has been formulated by the anti-Trinitarians. Using this verse, the basic argument flows like this: Since Paul himself says that the “head” of Christ is God the Father, therefore, Jesus is not an almighty God, for the true God is not subjected to any being – for He alone is the Almighty Creator. 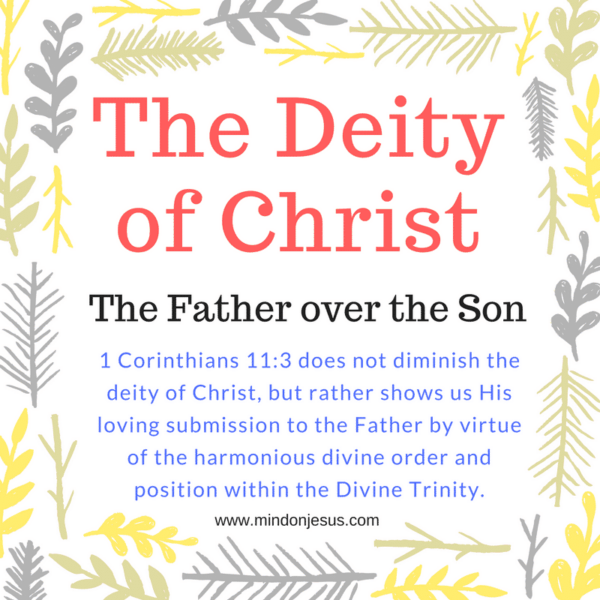 Rather, the context and reference of “headship” here has to do with position and order. For instance, if you’ll read the previous chapters, Paul rebukes the Corinthians of their spiritual immaturity and then instructs them to live for the glory of Christ and to set things in the Church in order.

The reason he says is: God is not the author of confusion (1 Cor. 14:33). God works in harmony. He is the God of order. And so, when Paul says that God is the head of Christ, the immediate context is not about divine nature, but order.

Indeed, God the Father is the Head of Christ in a sense that Jesus Christ came from the Father. In John 1:18, we read that in eternity past the Son was in the bosom of the Father. Thus, in the nature of the Godhead as a Trinity, Jesus Christ is called the Son of God by position or order.

Of course, it is improper to say that the “Son” is the “Father” and the “Father” is the “Son” – that’s out of order, so to speak. Indeed, their nature as divine is the same, but their position and persons are distinct.

Therefore, since Christ is the Son, the logical and harmonious picture then that the Bible can show us is the “order” that the Son is not above the Father by order or position. For this reason, in other parts of the Scripture, you’ll read Christ Himself says that “my Father is greater than I” (John 14:28).

But again, it never refers to the essence or nature, but logically refers to position, order, and harmony of the divine Trinity. Evangelical expositors usually explain the context of “greater” here in three areas.

First, the Father is greater than the Son by order of divine persons. As already mentioned, logically speaking, the Father is not the Son and the Son is not the Father. The Father is he from whom the Son proceeded by what is theologically called – eternal generation. That’s why Jesus is called “the only begotten Son” (John 3:16) from the bosom of the Father (John 1:18).

Secondly, the Father is greater than the Son in a mediator sense. In Christian Theology, this is called theanthropic or the God-Man. It was the Son who was sent into the world to die for sinners, not the Father – the sender.

Third, the term greater immediately points to Christ’s local and earthly state “who being in the form of God, thought it not robbery to be equal with God, but made himself of no reputation and took upon him the form of a servant and was made in the likeness of men” (Phil. 2:6-7).

Finally, another helpful literary context in 1 Corinthians 11 that would help us to understand the terminology of headship is the analogy that Paul used about the relationship between the husband and wife.

The divine order is: The husband is the head of the wife. And yet, the headship of the man does not imply nor give any minutest hint that the woman is a lesser human being than the man.

Both of them have the same nature, but regarding the position of leadership in the home and in their marital relationship, God gave to the man the authority of headship.

And originally, this headship did not say to the woman, “I am your lord, I am greater than you; I am a higher being than you!” No! But rather, Adam clearly said, when he saw Eve for the first time, “This is now the bone of my bones, and flesh of my flesh: she shall be called Woman because she was taken out of Man” (Genesis 2:23).

Thus, in line with the biblical data presented and observed, I can, therefore, conclude that the logical explanation of the Scripture regarding the “head of Christ is God” does not diminish the deity of Christ, but rather shows us His loving submission to the Father by virtue of the harmonious divine order and position within the Divine Trinity.