Among the many Biblical testimonies that explicitly declare the deity of Christ, I think, the most interesting of them all is the testimony of God the Father Himself, declaring that Jesus is God.

Now, this does not mean that those other Biblical passages are not important or interesting, but the testimony of God the Father is the “most interesting” because it is God the Father Himself who stands to testify for Jesus. Just imagine, God Himself says, “Jesus is God.” That’s already an absolute proof.

In the New Testament, the classic location of strong evidence regarding the deity of Jesus testified by God the Father is found in Matthew 3:16-17. It reads, 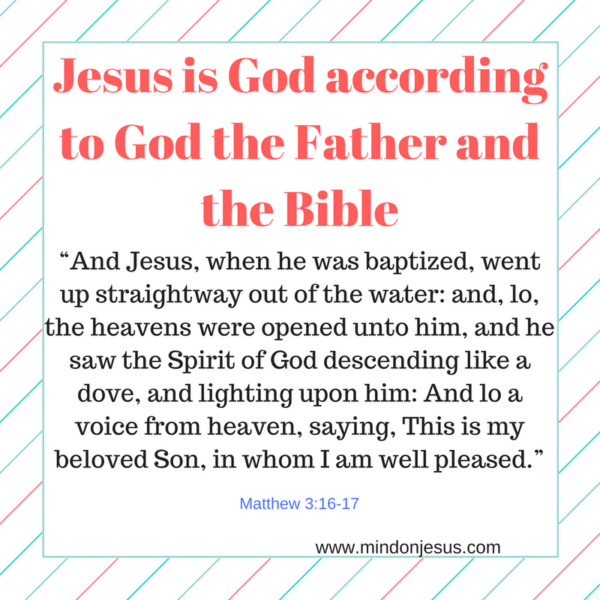 “And Jesus, when he was baptized, went up straightway out of the water: and, lo, the heavens were opened unto him, and he saw the Spirit of God descending like a dove, and lighting upon him: And lo a voice from heaven, saying, This is my beloved Son, in whom I am well pleased.” (KJV)

This is one of the phenomenal scenarios in the New Testament. There are lots to deduce here about the divinity of Jesus, but let us just focus on 3 important observations that prove Jesus is God,

The Father said Jesus is “My Son”

Now, take note of the pronoun “my” It’s an expression of possession in a very special and unique way that is exclusive to Jesus. “It implies that he is equal with God (Hebrews 1:5-8; John 10:29-33; John 19:7).” It seems that God the Father wanted to say here, “This Jesus is not a mere human being; He’s my Son.”

Yet, others may object by saying, “But God also calls Christians as His sons and daughters, as a way of saying they are His own. The same is also true for Jesus when the Father called Him ‘my son’ it only means that Jesus came from God, not that He is an eternal being without beginning like God.”

To answer this: Of course, the believers are also blessedly called by God as His “children” or let’s say “sons” and “daughters.” But I strongly disagree that the sonship of Jesus is the same with Christians. No, the sonship of Christ is unique.

The Jews addressed God as their Father, but it doesn’t mean that they are gods too, or they have the same nature as God. The same also with Christians, when Jesus taught us to pray “Our Father,” it does not imply for a second that we are gods too. No, far from it, but rather Jesus is just emphasizing our relationship with God in a saving and covenant-relationship.

But when the Father called Jesus as “My Son” that designation is only for Christ. Try to search the New Testament and even the Old Testament and you’ll never find this term applied by God to a mere man.

It is only applied to Christ. “The term “Son” is expressive of love, of the nearness of his relation to God, and of his dignity and equality with God.” Jesus then is the only One in the universe who owns this kind of relationship with the Father.

That’s why in the Gospel of John, you’ll read how many times Jesus addressed the Father as “my Father” (e.g. John 5:17, 30, 43). Actually, the Jews tried to kill Him because of that. No human or angelic being had ever received this kind of declaration from the Father himself; only Jesus. That’s why in the book of Hebrews 1:5, the writer said:

“For unto which of the angels said he at any time, Thou art my Son, this day have I begotten thee? And again, I will be to him a Father, and he shall be to me a Son” (KJV)

Concerning this verse, Biblical expositor John Hill said, “Christ is the Son of God, not by Creation, nor by adoption, but by nature.” No creature is worthy of this declaration, only Christ. Why? Well, because of the following reasons:

The Father said Jesus is “My Beloved Son”

Jesus is the center of God’s love, even before Creation. Jesus said in John 17:24,

Compare this with Proverbs 8:30, it says concerning the Son.

“I was daily his delight, rejoicing always before him” (KJV)

So Jesus even before the foundation of the world is the Beloved. Again, it’s so interesting that He is the only “beloved Son” mentioned by the Father. God does not have “other beloved Son/s.” Angels are not His beloved Sons. Man is not His Beloved Son. Christ IS the Beloved Son.

The Father did not say, “This is one of my beloved Sons.” He said, “This is my beloved Son.” Now, of course, others may object, “But we (Christians) are also called beloved!” Yes, Christians are also called “beloved” in the Bible and praise God for that. But our condition as “beloved” sons or children of God is not by nature. Paul says in Ephesians 2:3 and Ephesians 1:5-6,

“Among whom also we all had our conversation in times past in the lusts of our flesh, fulfilling the desires of the flesh and of the mind; and were by nature the children of wrath, even as others. Having predestinated us unto the adoption of children by Jesus Christ to himself, according to the good pleasure of his will, to the praise of the glory of his grace, wherein he hath made us accepted in the beloved.” (KJV)

God the Father is “well pleased” with Jesus as His “only beloved Son.”

This phrase is so important to describe not only the nature of Jesus but His relationship with the Father. “The word signifies a special and singular complacency and satisfaction. In other words, Christ is the center of God’s pleasure! That’s why after all the excellences, glories, and pre-eminence that Paul attributed to Christ in Colossians 1:13-18, he said in verse 19,

What fullness? That is, “the fullness of God, whatever divine excellence is in God the Father (Colossians 2:9, Ephesians 3:19).” Christ is the pleasure of God Himself because He is the Son. No creature has been given this kind of pre-eminence and fullness except Christ – obviously due to the fact that He is God, the Son of God.

Remember, God said He will not give His glory to another (Isaiah 42:8, 48:11), but here He is pleased to let “all the fullness” dwell in Christ. That’s why Paul said,

“For in him (Christ) dwells all the fullness of the Godhead bodily” (Colossians 2:9)

Thus, if I may say, the greatest glorification of the Father is when we glorify His Son. And so Paul said in Philippians 2:9-11 and 1 Corinthians 15:27-28

“Wherefore God also hath highly exalted him, and given him a name which is above every name: that at the name of Jesus every knee should bow, of things in heaven, and things in earth, and things under the earth; and that every tongue should confess that Jesus Christ is Lord, to the glory of God the Father…. For he hath put all things under his feet… And when all things shall be subdued unto him, then shall the Son also himself be subject unto him that put all things under him, that God may be all in all.” (KJV)

And so, in a sense, the highest worship that the creation can give to the Father will only happen when creation is put under the feet of the Son. But again, the major point of the argument is this: If Jesus Christ is not God, why then is God the Father well-pleased to subdue all things in creation under Christ, to worship Christ? The only obvious answer is: Because Jesus is God, He is the Son of God, the only begotten Son.

“Who (Jesus) being the brightness of his glory, and the express image of his person, and upholding all things by the word of his power, when he had by himself purged our sins, sat down on the right hand of the Majesty on high; Being made so much better than the angels, as he hath by inheritance obtained a more excellent name than they.

For unto which of the angels said he (the Father) at any time, Thou art my Son, this day have I begotten thee? And again, I will be to him a Father, and he shall be to me a Son? And again, when he bringeth in the first-begotten into the world, he saith, And let all the angels of God worship him.

And of the angels, he saith, Who maketh his angel’s spirits, and his ministers a flame of fire. But unto the Son he (the Father) saith, Thy throne, O God, is for ever and ever: a scepter of righteousness is the scepter of thy kingdom.”

That’s a very strong biblical statement coming from the declaration of God the Father Himself concerning Jesus Christ. It is so crystal clear that even a cursory reading of it will make you see that Jesus is not a created super-being, but the eternal God the Son, who is in the bosom of the Father (John 1:18), which is an expression of special intimacy and essential unity.

That’s the testimony of the Father- Jesus is God and that’s the Rock by and upon which our faith, worship, love, and service to God stand, grows, and finds glory.

The Bible - Psalms 149 1 - Praise ye the LORD. Sing unto the LORD a new song, and his praise in the … END_OF_DOCUMENT_TOKEN_TO_BE_REPLACED

What Others Are Reading