Protect your family online! Net Nanny is top-rated parental control software that parents have trusted since 1996.
Learn more
HomeJesus ChristBaptism of Jesus Christ by John and its importance

What happened at the baptism of Jesus, what is its significance and why is it so important?
The Cloud of the Covenant Curse – We must remember that a covenant messenger is sent to the violator of the covenant. He comes to the covenant breaker under the cloud of the covenant curse.

So did Jesus, the Son of God, also come to Israel, God’s covenant people, under the cloud of God’s wrath. This is indicated in Mal.3:2 – “But who can endure the day of His coming? And who shall stand when He appears? For He is like a refiner’s fire, and like fuller’s soap.”

John the Baptist said: “He shall baptize you with the Holy Spirit and with fire, whose fan is in His hand, and He will thoroughly purge His floor and will gather the wheat into His storehouse. But He will burn the chaff with unquenchable fire.” (Luk.3:16, 17). 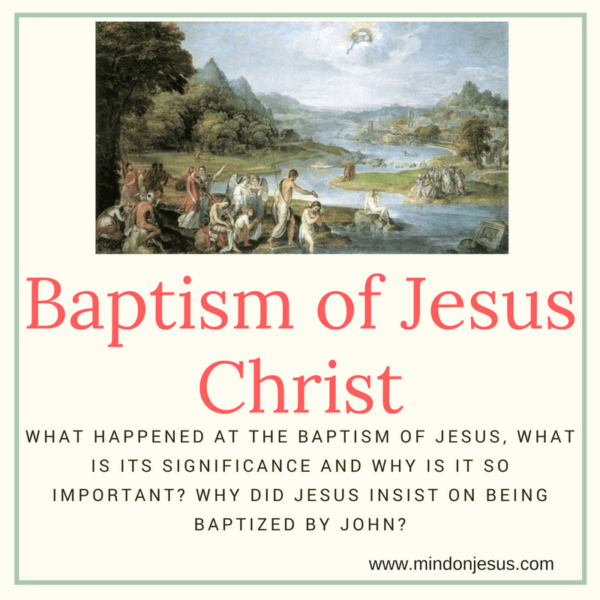 But God is long-suffering and merciful. Jesus did not come only to announce God’s righteous wrath against sinful humanity, but also to catch it up in Himself and to bear the punishment for it. How and why did He do it? Let us look at the bigger picture to find the answer.

John was to become known as the baptizer of those (Jews) who would confess to breaking God’s covenant. So when Jesus came to him to be baptized, he was astounded! He knew that in some way Jesus was to be revealed as the Messiah, the Christ, through him, but he never realized that it would include baptizing Jesus!

He thought that, if either he or Jesus would need to be baptized with the baptism of repentance of sin, it was surely NOT going to be Jesus (Joh.3:14). So why did Jesus insist on being baptized by John? To understand this, we need to look at the Old Testament.

Now we know that the rituals in the Old Testament (especially the offerings and the blood sprinkled to ritually cleanse things and people) were all pointers to Jesus who would come and fulfill them.

Also, the Passover Lamb that had to be slaughtered, eaten and its blood applied to the doorposts so that the angel of death would pass them by (Exod.12), pointed to Jesus. You can read an article on the blood of Christ.

The Two Goats of Leviticus 16

Briefly, though: the one goat, “the goat for the Lord”, was to be the sin-offering. The “goat for Azazel” was to be confessed over, so that the sins the priest confessed, were “transferred” to the goat. After that, it was to be led out into the wilderness and left there.

The meaning of “Azazel” is obscure. Some interpret it as “the evil one”, but a more proper translation would be something like “absolute removal”. Generally, it is accepted that this goat is called the “scapegoat”, which means being guilty of and punished for something he did not do.

Let us then call it the scapegoat. This sin-laden scapegoat was then to be led into the wilderness – traditionally seen as the abode of the devil.

Now we must remember that in all these rituals of Lev.16, the objective was ATONEMENT, and they pointed towards being fulfilled by Jesus Christ. John was baptizing covenant breakers who confessed their sins of violating the covenant.

When Jesus came to John, the latter “introduced” Him to the crowd, saying: “Behold the Lamb of God who [now] takes away [properly: “picks up and carries away”] the sin of the world!” (Joh.1:29).

Can you see how John, in one statement, summarizes the two goats of Lev.16? “Lamb of God” always points to being slaughtered – and Jesus died as a sin-offering – even as the Goat for God in Lev.16.

And the sinless Jesus, Lamb of God, was to “pick up and carry away” the sins of the world – meaning that He was now to become the “scapegoat” for the sins of man. In this act, Jesus fulfilled Lev.16 – both a Sin-offering as well as a Scapegoat.

Is it any wonder then that the sinless Jesus insisted on being treated like those who were confessing their sins in baptism? Remember Lev.16 – the confession of sins passed those sins onto the scapegoat that had never sinned before.

John did not yet understand that Jesus was actually stepping into the sinners’ shoes. And there, where the covenant breakers were confessing their sins, those sins passed onto Jesus and He became sin-laden in our stead. He became the scapegoat for us.

Jesus Led Into the Wilderness

And after the baptism of Jesus, yet another piece of the picture falls into place: the Holy Spirit leads our Sin-offering and Scapegoat, Jesus, away into the wilderness and leaves Him there to be tempted by the devil (Mat.4:1).

And Jesus carried those sins not only into the wilderness but also three years hence to the cross on Calvary, where He was punished and died for it – not only for the sins already committed but also for future sins that we would commit.

Thank God that Jesus has already been punished for those sins which we repent from and confess to Him. He promised that He would not send a contrite and broken heart away (Ps.51:17); He will not break a bruised reed, and He will not quench a smoking wick (Mat.12:20).