HomeJesus ChristWhere was Jesus during the three days in the tomb?

There is a pretty significant amount of controversy about this specific topic and many, like myself, have always had our own opinion about what actually took place during those three days in the tomb.

It’s not always easy to distinguish all of the traditional views from actual Scripture either. Does the Bible actually tell us where Jesus went during those three days? Our goal here is to give you the basic information that we know and the foundation to find the answers yourself. 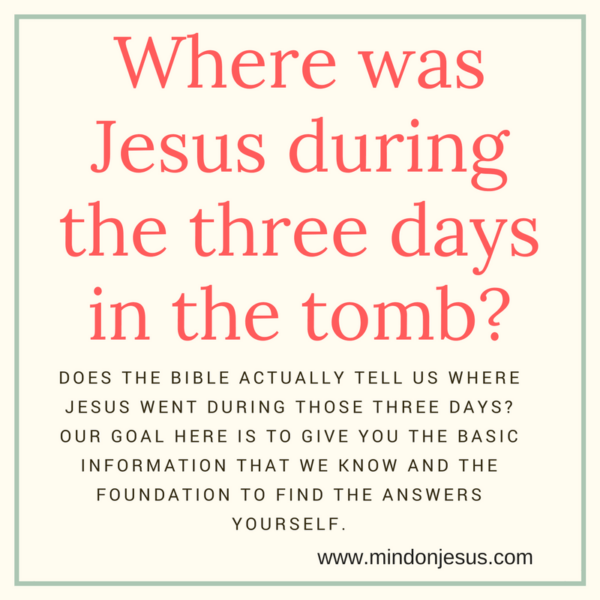 As you continue to read the rest of this article, don’t simply take my word for it, or anyone else’s for that matter. Take it as an opportunity to pick up a Bible, browse the web, and search for the answers yourself. It is your right and your challenge to embrace the thought of learning something more than the simple answer.

Uncovering what the Scriptures say about where was Jesus during the three days in the tomb is the first and most important place to start. I will list some verses here and I encourage you to read them carefully. I know it is tempting to skip over long passages of Scripture in an article like this, but they are the key to the answer of this question and you won’t be able to form your own conclusion if you don’t start here.

Most theories about the whereabouts of Jesus when he was in the tomb start with 1 Peter 3:18-20. For our purposes, we will be using the NCV version of the Bible because it is a little easier to understand. This passage reads:

“Christ himself suffered for sins once. He was not guilty, but he suffered for those who are guilty to bring you to God. His body was killed, but he was made alive in the spirit. And in the spirit, he went and preached to the spirits in prison who refused to obey God long ago in the time of Noah. God was waiting patiently for them while Noah was building the boat.”

At first, it seems fairly straightforward, Jesus was made alive in the spirit and went to preach to the spirits imprisoned from the time of Noah. It is straightforward and yet, we haven’t really seen something like this happen in Scripture before, so what does it really mean? Let’s look at the rest of the passage to shed a little more light on it. Here is 1 Peter 3:20-22 in the NLT, again, because it’s easier to understand,

“Only eight people were saved from drowning in that terrible flood. And that water is a picture of baptism, which now saves you, not by removing dirt from your body, but as a response to God from a clean conscience. It is effective because of the resurrection of Jesus Christ. Now Christ has gone to heaven. He is seated in the place of honour next to God, and all the angels and authorities and powers accept his authority.”

The previous passage states that “in the spirit, he went and preached,” but if you keep reading this passage, there is nothing to indicate a time frame in which Jesus did this. If we keep reading further, it plainly teaches that it is because of Jesus’ sacrifice that we can be saved. It teaches us that because Jesus lived a sinless life, he now sits in a place of honour next to God. It is a reminder that even in the midst of the worst of our struggles; we can find the strength to overcome them.

The next passage that we need to consider is Ephesians 4:8-10, here it is in the NLT:

“That is why the Scriptures say,

“When he ascended to the heights he led a crowd of captives and gave gifts to people.” [Ps. 68:18]

Notice that it says “he ascended.” This clearly means that Christ also descended to our lowly world. And the same one who descended is the one who ascended higher than all the heavens so that he might fill the entire universe with himself.”

Again, at first this passage may give the impression that Jesus ascended from the afterlife, preaching to a ‘crowd of captives,’ but as you finish reading the rest of it, you realize that is not the case. The verses before this are describing how we all have gifts and we need to be using them for God’s glory.

Jesus had a gift for speaking love into the hearts of men and Paul was using that depiction to show his readers that there is more to life than division and brokenness. If you take the opportunity to turn to Psalm 68, it speaks about the glory of God and offering Him praise, not necessarily a verification of where Jesus was during those three days.

It is important to note that there is more to understanding the Scriptures than simply taking a few words and moulding them to your own understanding. Uncovering the actual Scriptures and context behind the things that we claim to believe is a part of the journey and it takes time and prayer to gain more understanding.

Regardless of what I write here, the Bible doesn’t really give a clear answer to this question. What has taken place is that people like me have come to their own conclusions from what they’ve learned in life and through Scripture. So make it a point to do some investigative detective work for yourselves. In the end, that’s what’s really going to help you find the answers.

One of the questions that often comes up along with the issue of where was Jesus during the three days in the tomb, is that of the sins of humanity. Wouldn’t that mean that Jesus went to hell where sinful people were? To understand this, we need to first understand that there are different meanings of the word ‘hell.’

Every time we see the word ‘hell’ in an English translation of the Bible, it does not necessarily always have the same meaning. There are a few different Greek and Hebrew words that are all translated as simply ‘hell’ in English. The Hebrew word Sheol, for example, refers to ‘the grave’ in the Old Testament; as we see in such passages as Numbers 16:30.

Historians suggest that there are two sides of hell, one is a blessed side and the other is the suffering side, as we see in Luke 16:22-23 ESV. Some argue that Jesus went to ‘Sheol’ rather than ‘Hades,’ which is what historians consider the suffering side of hell, or what we think of as hell. All of these different words mean different aspects of Satan’s Kingdom, so taking the time to really think about the context of each word is vital to gaining understanding about whether Jesus did actually go to “hell.”

Studying this topic can be a bit daunting but there are places we can go to for the answers when we need them. C.S. Lewis wrote a book entitled The Great Divorce, which is a fictional account of a man’s ride from the gates of hell to the gates of heaven. While it is fiction, it does provide a lot of insight into the concepts of hell and even heaven. You can find a few other books on this topic by searching online. Finding the answer you seek may not come easy but they are there for us to find and it’s up to us to search for them.

As Jesus spoke his last 7 sentences upon the cross at the crucifixion, He was in the midst of a dark battle for His soul. He accepted this battle so that the children of God would be able to embrace forgiveness and life. He took the sins of all of us, past, present, and future, and suffered so that we wouldn’t have to in the end.

When Jesus spoke His last three words, “It is finished,” He had already won the battle that would lead to Salvation for all who would accept it. It was in those last few moments of His physical life that Jesus fought for our souls. It was in those moments that He was able to overcome the sins of the world and find redemption for us all.

While many would question where He was during the three days His body lay in the tomb, I always questioned where His spirit was during those last few hours of His body’s physical life before it was placed in the tomb.

The battle in those moments must have been the most strenuous moments of Jesus’ entire life. He bore the sins of everyone upon his shoulders and when He took His last breath, that burden was taken from Him. Because of Jesus’ willingness to ‘accept the cup,’ He was awarded a place of honour.

In the end, historians who believe Jesus went to hell during those three days know that there is a deeper meaning behind it all. Jesus broke free from the bondage of the sins that were placed upon his shoulders. Each time the question of Jesus’ whereabouts during those three days in the tomb comes up, I think about what he gave instead so that we could break free ourselves.

You can read more about Jesus and the 3 days in the tomb.

Were the three days and three nights that Jesus was in the grave a full 72 hours?

Where was Jesus for the three days between His death and resurrection?

Where did Jesus go after He died on the cross?