To summarize: In the foregoing chapters the author has set out how Jesus Christ exceedingly excels the prophets of the Old Testament, the angels, mankind in general and, in particular, Moses, the great leader of God’s people.

He explained how those people’s wanderings and ultimate destination were but a foreshadowing of God’s final goal for His people – the eternal rest for those who would believe in Jesus Christ. Finally, he warned against the great danger of apostasy (the slipping away from the faith into unbelief) and so missing out on that ultimate rest. 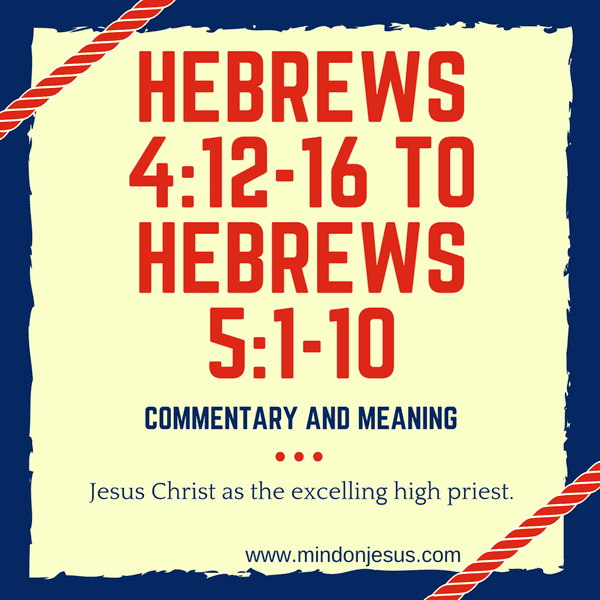 Now, in the light of what was already said, and in the preparation of what he wants to explain, the author calls upon his readers to consider the exceeding weight and importance of what God himself wants to impress upon them through His Word.

The preached Word of God comes armed with threats. It has the power of the living God behind it and conveys either death or life to the hearers (please see also 2Cor.2:15-16). Please bear with me while I explain what this strange statement means.

In Biblical times it was customary for a victorious general to capture some prisoners, preferably one of a high ranking – even the enemy’s general.

When he returns to his home base with his army, he would lead his army on his warhorse, with his captives in chains trailing behind him. When the news of his victorious return reaches the city, his people would gather along the streets and burn aromatic spices, the fragrance of which fills the air.

To them, it was a fragrance of victory and life, but to the captives, it spelled a certain death.

This is then the warning that the author wants to drive home to his readers:
Hebrews 4:12: “For the Word of God is living and powerful and sharper than any two-edged sword, piercing even to the dividing apart of soul and spirit, and of the joints and marrow, and is a discerner of the thoughts and intents of the heart.”

God’s Word exceeds the sharpness of a two-edged sword. Even as a sword pierces a body, so God’s Word pierces the heart, dividing even soul and spirit, joints and marrow, discerning even the thoughts and intents of the heart.

These two verses, then, is a stern warning to those who would not take God’s Word seriously – His directives, commands, and warnings.

The author now introduces yet another aspect of Jesus’ supremacy and excellence – His office as the great High Priest – around which most of this letter revolves.

Hebrews 4:15:. Our High Priest has not dissociated Himself from us. He carried a human body, together with its nature (but without sin), so He can sympathize with our feelings, emotions, weaknesses, infirmities and the temptations we face.

Hebrews 4:16:. If we did not have Jesus Christ as our Mediator, we could not have the boldness to approach God’s throne of grace. But now, having been reconciled with the Father through Jesus Christ, we may find mercy and grace.

Indeed, with our Advocate at our side, pleading for redemption with the paid price in His hand, our loving, reconciled Father is all too pleased to grant Jesus’ pleadings for us, no matter how sinful and polluted our natures are.

The author now turns to the high priests of the old dispensation and explains their position in order to make it clear how Jesus Christ exceeds them in honour, excellence, and essence.

Every high priest was appointed to his office from among mere men, to offer gifts as well as sacrifices for sins committed. These inanimate things and sacrifices were not of the high priest himself but were brought by the people.

Being from among the people, he could be compassionate towards those who were ignorant or wayward, even as he himself needed mercy and compassion. After all, he himself is also encompassed with infirmities, even unto sin. Therefore he offered not only for the sins of his people but also for his own sins.

The honour of being the high priest was not of his own, but due to the calling of God, as was the case with Aaron.

Hebrews 5:5-10: How Christ exceeds the old order of Priesthood.

Even as the high priests of old were called by God, so was Jesus. So also did Jesus not glorify Himself by taking the office of High Priest, but was appointed by the Father who said to Him: “You are My Son, today I have begotten You” (Psalms.2:7).

The fact and the excellence of the High Priesthood are also stressed by the author when he quotes from Psalms.110:4: (Jehovah has sworn, and will not repent,) “You are a priest forever after the order of Melchizedek.” The order of Melchizedek is properly explained and discussed in Hebrews Chapter 7. God willing, we will get to it.

Hebrews 5:7 tells us how Jesus vexed, yet remained obedient to the Father, about His horrifying trial and death. Yet He did not shrink from paying the ultimate penalty and sacrificing Himself for our sins.

“For Jesus, in the days of His flesh, when He had offered up prayers and supplications with strong cryings and tears to Him who was able to save Him from death and was heard in that He feared”

Sometime before His crucifixion Jesus had already told His disciples that He was to die. He even described it as “I have a baptism to be baptized with, and how I am pressed down until it is accomplished!” (Luk.12:50).

All through His life, Jesus prayed for the world, for His disciples, and confirmed the bond of oneness between Himself and the Father.

Especially during those last two days of his earthly life, Jesus was intensely aware of His coming passion. The night before His death, while praying in the garden, “…being in an agony, He prayed more earnestly. And His sweat was as it were great drops of blood falling down to the ground.” (Luk.22:44).

Jesus was heard to fear, our present verse states. It was not death that He feared because He had already told His disciples several times that He would be resurrected from death (Matthew.16:21; 17:23; 20;19).

Indeed, He had the awful sense of the weight of sin and God’s wrath because of it. His human nature would have sunk under that weight, had He been forsaken by the Father who carried Him even through death.

Hebrews 5:8-10:. “though being a Son, yet He learned obedience by the things which He suffered. And being perfected, He became the Author of eternal salvation to all those who obey Him being called by God a high priest after the order of Melchizedek”.

In suffering all in His human capacity, and resisting all temptations throughout His human life, Jesus practiced obedience to the Father, thereby willingly learning to keep His Father’s will towards the salvation of a lost world.

Through His perfect obedience “He became the Author of eternal salvation to all those who obey Him”.

Through His suffering and perfect obedience, He fulfilled the office to which the Father had called Him, being “a high priest after the order of Melchizedek”.

Part of the series – Letter to the Hebrews