HomeBible Verses | ScripturesHebrews 2:5-18 commentary. Jesus, the founder of our salvation

The foregoing part Hebrews 1:4-14 established the excellence and supremacy of Jesus Christ and His infinite superiority over those heavenly beings, the angels. These are but his messengers and servants. Hebrews 2:5-18 commentary

Now the focus shifts to Jesus Christ as the Saviour of mankind who is of even lower status than the angels. Since salvation is involved, it is clear that the issue here is not about angels, but about man.

Hebrews 2:5 – For He has not put in subjection to the angels the world to come, of which we speak. What is the meaning of “the world to come”? Now we have to keep in mind what Heb.1:1 stated: In times past God has spoken to man at many times and in many ways, by the prophets. 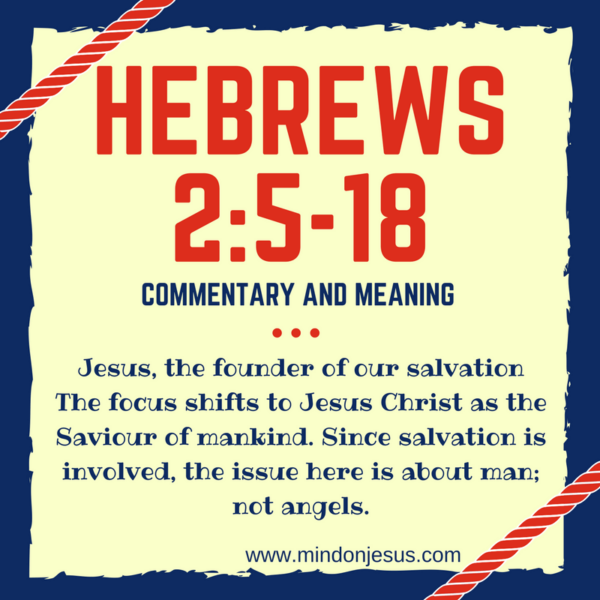 That was in the old, now antiquated dispensation during which God was working towards the new dispensation – that of the Messiah. This was, at that time, “the world to come”.

Hebrews 2:6-7 – Here we must carefully consider the meaning of “man” in order to understand the author’s intention of showing how Jesus Christ fulfilled God’s plan of salvation. This is a quote from Ps.8:4-6, which reads:

“What is man, that you are mindful of him? and the son of man, that you visit him? For you have made him a little lower than the angels, and have crowned him with glory and honour. You made him to have dominion over the works of your hands; you have put all things under his feet”.

In the old dispensation God did indeed, proleptically, give man (the “first Adam”) dominion over the works of His hands and commanded: “Be fruitful, and multiply, and replenish the earth, and subdue it: and have dominion over the fish of the sea, and over the fowl of the air, and over every living thing that moves upon the earth.” (Gen.1:28).

This “glory and honor” that God bestowed on Adam, was soon to be lost through his sin. So also was his “dominion” to perish. By this one man sin entered into the world, and thereby, death (Rom.5:12).

Yet this first Adam was a prolepsis (figure/type/foreshadow) of the man Jesus Christ (Rom.5:14). There are quite a number of antitheses as well as parallels to be drawn between the first Adam and the second/last Adam, Jesus Christ.

The first Adam’s sin led to damnation and death, but the grace and righteousness of the second Adam led to salvation and eternal life. By Adam’s disobedience many were made sinners, but by the obedience of Jesus, many are made righteous. Through the Law, sin abounded, but in the same measure, the grace and justification through Jesus Christ also abounded (Rom.5:12-21).

There are also parallels (the earthy and the heavenly) to be drawn between these two Adams, even in the command that God gave the first Adam in Gen.1:28 (see quote above). God said: “Be fruitful and multiply”, which both Adam and Jesus Christ did (Rom.5:15). Adam was to “replenish the earth”, which Jesus has already started doing and will complete in the fullness of time.

Adam was given dominion over all of God’s creatures, which were soon to perish, but Jesus has an everlasting dominion and supremacy as we have seen earlier in Hebrews Chapter 1. Further parallels and antitheses may be drawn, but let the above suffice for the purpose of our understanding the intent of the author of this letter.

So we see that we must carefully consider each statement in order to understand which “man” the author had in mind. We now live in the Messianic dispensation/age, which was then called “the world to come” (v.5). Therefore our two verses (6 and 7) speaks about both Adam and, prophetically, about Jesus Christ. Both had/has dominion, both were fruitful and multiplied, and the actions of both had/have consequences for mankind, although vastly different, as we have seen.

Hebrews 2:9 – “But we see Jesus, who was made a little lower than the angels for the suffering of death, crowned with glory and honour; that He, by the grace of God, should taste death for every man.” At last!! Scriptures fulfilled!! In Jesus, we now see the Seed of the woman who would defeat Satan (Gen.3:15).

We now see the Seed of Abraham as promised by God (Gal.3:16), through whom God would multiply Abraham’s posterity in an exceptional way (Gen.17:6): All who belong to Jesus Christ would become Abraham’s posterity and be heirs of all God’s promises (Gal.3:7, 9, 29). (Please read the whole of Gal.3 for further clarity.)

Yes!! We see Jesus, verily God, who has taken on the body and nature of man – a status even lower than that of the angels, which are His servants and messengers! And yet He was doubly “crowned with glory and honor”: 1) Having taken on the nature of man, but without any sin; 2) Having conquered death, has gone to heaven to sit at the right hand of God as everlasting King and Majesty.

But now we must also take notice of the reason why Jesus had to take on the form of a man who’s status is even lower than His servant-angels. We see the reason in “that He, by the grace of God, should taste death for every man”. Oh! The wonderful grace of God – that He should offer His only-begotten Son so that whosoever would believe in Him, should not perish or come to destruction, but shall have everlasting, eternal life! (Joh.3:16; 1Joh.3:16).

By His death, Jesus was bruised, but by His resurrection, Jesus indeed crushed Satan’s head as God had promised (Gen.3:15). His victory over death is but one of the ways in which He was “crowned with glory and honor”. Even as this author writes: “we see Jesus, who was made a little lower than angels … that He … should taste death for every man”.

Firstly, so that He, as the Originator of salvation, should be made “perfect through suffering” (Hebrews 2:10). How must we understand this? Was Jesus not “perfect” in everything, including being sinless? Why did He have to suffer to become perfect?

The answer lies in the fact that “The wages of sin is death, but the gift of God is eternal life through Jesus Christ our Lord” (Rom.6:23). To save us from death, Jesus had to be “man” in order to bear the wages of man’s sin.

Now Hebrews 2:11 goes on to tell us why this had to be so. “For both he that sanctifies and they who are sanctified are all of One”. Of One? Yes, since we became children of God our Father through the substitutionary death of Jesus Christ, we are now children of the Father along with Jesus, the Son of God. “For this cause He is not ashamed to call them brothers” (v.11).

In Hebrews 2:12-13 this view is confirmed with (prophetic) quotes. From Ps.22:22: “in the midst of the church [i.e. “the called-out ones”] will I sing praise unto You” (v.12). The “church” here indicates “they who are sanctified” in v.11. When He (Jesus) observes those that have been saved by the shedding of His blood, He will praise the Father in their midst.

The further confirmation of what is said in v.11 “Behold I and the children which God hath given me” is drawn from Isa.53:10, part of which states: “Yet it pleased the LORD to bruise him; he hath put him to grief: when thou shalt make his soul an offering for sin, He shall see his seed…”

Hebrews 2:14, gives, even more, reasons why Jesus had to die as “man”. “Forasmuch then as the children are partakers of flesh and blood, he also himself likewise took part of the same; that through death he might destroy him that had the power of death, that is, the devil”.

This impresses on us again the wonderful ways in which God has worked out His plan of salvation and has kept His promises. We are reminded again that God warned the serpent (the devil), “that had the power of death” that, although he would bruise the heel of the woman’s Seed, that Seed would crush his head (Gen.3:15).

Hebrews 2:15 briefly sums up the total effect of Jesus’ work of salvation – the deliverance of them that were subject to the bondage of Satan.

Hebrews 2:16-18 assert the incarnation of Christ, and why He did not take upon Himself the nature of angels, but that of man. And he shows the reason and design of His doing so. He was made like unto His human brothers, so that He may be a merciful and faithful high priest in order to reconcile sinners with God, because “He himself has suffered being tempted”. Whereas the high priests of the Old Testament have sacrificed animals for reconciliation, Jesus sacrificed Himself and, in doing so, He became both our High Priest as well as the Sacrifice.

Later in this letter, to the Hebrews, we will learn much more about Jesus as our High Priest.

Part of the series – Letter to the Hebrews