HomeDevotionalsOn Loving the Homeless and Downtrodden

Loving the Homeless and Downtrodden should be a part of your Christian life. Poverty and homelessness is not a new problem. In the Bible, the needy were to be loaned money without interest (Exodus 22:25), and God Himself said that there would always be poor among the people as a fact of life (Deuteronomy 15:11).

However, that does not mean that people were instructed to be unkind, unfair, or uncompassionate toward those in need. In fact, quite the opposite is true. Those who followed God had the responsibility to: 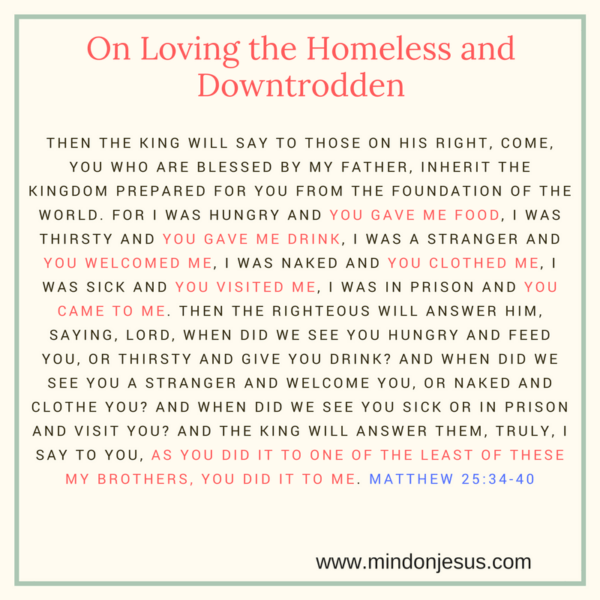 Doing the above will also help you find happiness in life.

With such commands issued – both from God and Jesus – you would think that the problems facing the poor of today’s time would be handled. Unfortunately, that is not the case, for in a world with a population of over 7.5 billion people, with an average of 1.5 – 3 billion people living in impoverished conditions, only an estimated 30% of funds collected by charities and churches are what actually go to help the poor in some way.

The Work of the Early Church

Starting from the book of Acts, the Apostles were very conscious about caring for the poor. Not only did they seek out who among them needed assistance, but they were able to meet the needs of others by selling their possessions in order to have the money to help them (see Acts 4).

Such selflessness came naturally to them, as a result of their fervent faith. They didn’t let their possessions keep them from losing focus on what was important, and therefore it was easy for them to part with whatever extra they had, and do without if it meant it would be to someone else’s gain. This they did until ALL had enough.

The Good and Bad of the Modern Day Church

Helping the poor is something that church-based and philanthropic organizations do strive to accomplish, as seen by the many local, national, and global campaigns for things like providing food, shelter, water, medical treatments, and money for the poorest of citizens around the globe.

Churches running such initiatives do so with their congregations and community partners. They promote the work via advertising in various forms – mailers, phone calls, collection appeals at church, and with the media outlets.

For all those reasons, it would seem that the modern day church is going above and beyond for the poor in their midst, even with the low number of donations received which are allocated to their care. So why is there still such an imbalance?

Three reasons why there are always more poor and needy people to continue helping:

More people – With an ever-growing world population, both the poor and church congregations (or people who work for charitable organizations) are high in numbers.

And when everyone gives to the poor in various amounts – some more or less than others – whatever is received has to meet the needs of a church/organization so it can continue to run, and then the rest of its donations are able to benefit the poor.

Technology may be good at keeping more people connected who wouldn’t otherwise be, but at the same time, it also allows more people to have less meaningful interaction with others, including specific needs that specific people may have.

You don’t know who or what those are unless you are directly making connections with others and investing your time in developing them – which is something you can be sure the early church practiced regularly.

Conflicts in ideas – Helping the poor and needy sounds good on paper (or computer screen). It’s admirable to want to alleviate another person’s suffering. However, as humans, we are also given the diversity of thought, so that people make suggestions and create programs based on the ideas they have – some of which do work, while others don’t.

Of those that do work, not all people are responsive to helping meet the needs of others. Some people don’t consider giving to the poor because they don’t identify with them, or think the poor could be helped best in a different way.

Too often, ideas clash between people who mean well but can’t agree on what or how things should be done or lack of volunteers. Some areas are overlooked altogether, or funding dries up due to lack of attentiveness.

Meanwhile, the poor are only getting poorer, and shelters or subsidized housing and assistance programs can only go so far – far beyond the ability of single communities are equipped to handle alone.

Assisting the Poor in Your Community

The sheer magnitude of the problem of poverty and homelessness can overwhelm the hearts of those who want to help. They don’t have to go far to see that the poor and needy are among them, desperate for food, shelter, and hope. So what can you do?

Learn about available programs and organizations in your area, how they work, and how many people they serve. It’s a step that will help you decide how to best volunteer your time or donate funds. Look for those which give you to directly connect with those in need, and that way you will hold a personal stake in what happens, and be more like to commit to the job.

On Loving the Homeless and Downtrodden – By Natasha Polak

The Fourth Book of Moses, called Numbers Chapter 6 1 - And the Lord spoke to Moses, saying: 2 - … END_OF_DOCUMENT_TOKEN_TO_BE_REPLACED

The Bible - Genesis 41 1 - And it came to pass at the end of two full years, that Pharaoh dreamed: … END_OF_DOCUMENT_TOKEN_TO_BE_REPLACED

What Others Are Reading