HomeThoughts | QuestionsThe Davidic Covenant and its Preserving Power on the Nation of Israel.

“The reigns of David and Solomon constitute the golden age of the Jewish state.” Even more, God has promised David that his throne will be forever and that the scope of its reign will be universal. And yet, when you look at Israel historically, it seems that this promise is far from fulfillment.

Starting from the fall of the divided kingdoms of Israel – the northern kingdom under their enemy the Assyrians (724-722 BCE) and the southern kingdom of Judah under Babylon (586 BCE) – Israel as a nation has never returned back to its former glory (religious, political, economic). 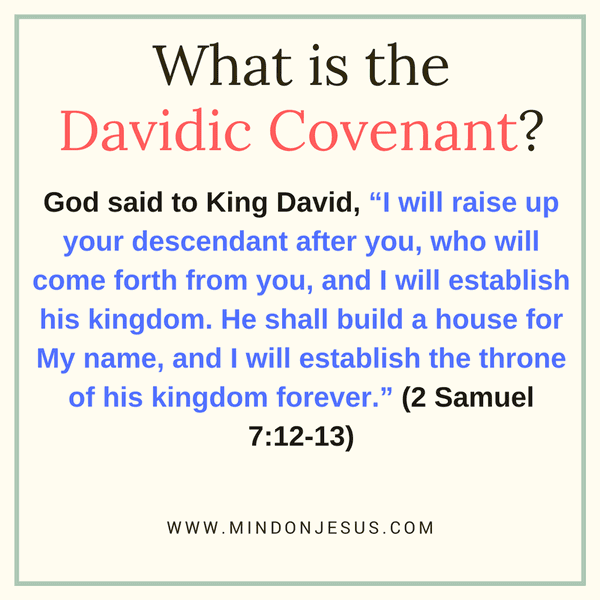 After the Assyrian and Babylonian captivities, there came other empires that subdued them, namely Persia (538 BCE) and Rome (63 BCE), though by providential blessings there were times when they had been given small windows to express their national identity as a nation, particularly with regards to their religion.

Even when Jesus was born and later on began His ministry, Israel was still under the Roman Empire. It was not a free and sovereign country though they enjoyed some religious freedom of expression as long as it did not create havoc in Roman territories or inspire revolt.

Interestingly, when the Jews (not the religious leaders) began to see Jesus as a man imbued by God’s Spirit, working with mighty wonders, healing the sick, casting out demons, silencing the hypocritical Pharisees, and preaching the coming of God’s kingdom, they started to think that maybe he was indeed the promised Messiah – the son of David (John 6; Matthew 21:9).

Yet, later on, their awesome admiration of Him with shouts of “Hosanna to the king of David” had been manipulated by the religious sectors to be shifted into shouts of disdain and anger, shouting “crucify Him” (Matthew 27). They killed their King – the King of the Jews (Acts 3:13-15; 1 Corinthians 2:8).

Then in 70 CE the Jews had once again experienced the destruction not only of their nation but of their dignity and the emblem of their religious hope as well. The Roman army, led by a soon to be Emperor Titus, had besieged and conquered the city of Jerusalem as Jesus himself prophesied to happen (Matthew 23:37-39).

During this time, there were elite Jews and leaders who had been exiled, sold, and killed. But again, in 132 CE, in trying to free themselves from Roman reign, the Jews led by Bar Kokhba rebelled against Hadrian, yet greatly failed and were defeated.

As a punishment, Hadrian changed the name of Jerusalem to Aelia Capitolia; he made it a pagan city and banned the Jews from living there. Moreover, after the reign of the Roman Empire in Jerusalem, the Arabs in 634-641 CE conquered and took the city of Jerusalem for themselves and made Islam the center of religion for the next 1,300 years of their reign under different dynasties.

We can still continue the story of Israel’s failure and suffering as a nation, but suffice to show, that after God’s covenant with David to build an everlasting, strong, and universal throne, it seems to be, that historically speaking, God’s promise is not taking place.

Take note, Israel declared their national independence on May 14, 1948, and was a year after recognized on May 11, 1949. That’s not ancient but part of Modern history. And so, to calculate the Diaspora of Israel starting from Assyrian and Babylonian captivities till 1948, you’ll be struck by a very long period of national struggle that they went through, not mentioning the terrible and fatal experiences that they’d encountered in different parts of the world, like during the time of Hitler.

But then, despite all the things that they went through, you’ll be paused to think and then say, “They’ve survived.” And yes indeed, they’ve survived. Israel is still alive and well.

Of course, the question is: “How” and “Why.” The simple answer is because of the Davidic Covenant.

The Davidic Covenant is the hope of Israel, the hope that someday, in the fullness of times, after the dark night of their souls and of their nation, “the sun of righteousness will arise with healing in his wings” (Malachi 4:2), for the Messiah will come and will reign mightily and gloriously over them and through them to all the world.

“On the ground of this promise the prophets, while declaring God’s wrath against His people on account of their sin, looked beyond the Divine chastisements to the final era of perfect salvation and blessedness, which would be ushered in when the nation had returned to Yahweh.”

The surety of this promise is solidified by the character of God and of the nature of the promise itself.
Carefully reading 2 Samuel 7:11-16, here are the three nation-preserving characteristics of the Davidic Covenant.

The Davidic Covenant is Unconditional

In the Scriptures, there are at least 2 kinds of covenants between God and man, conditional and unconditional.

Regarding the unconditional covenant, its fulfillment “solely depends upon the faithfulness of God.” “This covenant is characterized by the words, ‘I will’ referring to God fulfilling His promise and purpose.”

The Davidic Covenant is an unconditional covenant, for it was God who initiated its establishment, not Man, not David. God’s initiation to introduce the covenant was not enthused or influenced by the intention and plan of David to build a house for God.

Its establishment was not because David was good and worthy to be rewarded by divine favor, but rather because it was a sheer will of God to do so. God used the term “I will” 4 times. In other words, He’s the One who will fulfill the Covenant, not David, and not even his natural seeds.

The Davidic Covenant is Perpetual

Part of the many solid divine reasons why the nation of Israel was never totally wiped out on earth by their enemies was because of the fact that God promised David that his posterity, royal authority, and sphere of rule will be established forever and ever.

And of course, how can the throne of David reign, if there are no people to rule over? Thus, the Davidic covenant is the preserving hope that protects Israel from their enemies. As long as this covenant stands, Israel, in the end, will win the war; not by their might and wisdom but by the supernatural appearing of their Messiah.

In other words, there will be a literal fulfillment of the promise in the land of Israel. And the one who will fulfill this is the ultimate seed of David – the Messiah Jesus Christ.

The Davidic Covenant is Messianic

Though the covenant is theologically termed “Davidic” but in actuality, the emphasis and center attraction of the covenant are neither David nor his natural descendants, but the Messiah himself. Thus, it is a grave hermeneutical error to interpret the passage or covenant as Davidic in a sense that the natural posterity of David, starting from Solomon, will fulfill the covenant.

No, rather the reason why it is called Davidic is because God said in (2 Samuel 7:12), “I will set up thy seed after thee, which shall proceed out of thy bowels.” In other words, the person of the Messiah will come from the royal line of David.

That’s the ultimate meaning of the statement, that’s why God used a singular term “seed” not “seeds,” in order to show that He was referring to the Messiah, not the immediate and natural seeds of David. St. Paul and even the Lord Jesus used this grammatical detail to point out the identity of the Messiah who will come from the line of David, whose origin is divine, supernatural, and eternal (Matthew 22:41-46; Galatians 3:16).

Moreover, the Messiah is the very reason why the Covenant itself is unconditional and perpetual because when God established the covenant with David, He was looking to Christ, the Messiah. Practically speaking, no human being or king, even from the line of David was and will be worthy enough to satisfy the unconditional character of the promise.

God had already anticipated that the kingdom of David will fail in a sense that his immediate and natural seeds starting from King Solomon will commit sin, even terrible sins before God. Practically and historically, the sins of the kings of Israel both in the northern and southern kingdoms were the reason why they were sent to various captivities (Jeremiah 19).

Most of the human kings of Israel failed to follow in the footsteps of their father David, to faithfully serve the Lord will all their hearts. And so, focusing then on their serious failures and wickedness might make you wonder and think “Did God make a mistake to choose the line of David as the lineage of the coming Messiah?” Of course, the answer is no; God is too wise to be mistaken.

It was the wicked kings of Israel who failed to preserve their relationship with God as Covenant People. But then, the fulfillment of God’s covenant with David is not through his human sons but through the “promised seed” who will come from the line of David, whose nature and origin is divine and eternal (Micah 5:2; Isaiah 9:6).

And in Christian Theology, the prophetical fulfillment of the Davidic Covenant has been fulfilled in Jesus of Nazareth. For instance, in the New Testament, the book of Matthew gives us an emphatic account about the validity of Jesus being the promised seed of David.

He is the fulfillment of all messianic prophecies concerning the coming savior and King, who will first come to save His people from their sins, spreading the goodness of salvation to the world, and will come again as the King of kings and Lord of lords to usher all of God’s people into eternal kingdom and universe, where there is no sin, Satan, wicked people, and no more pain.

That’s the theology of the New Testament – Jesus is the ultimate son of David, destined to reign over the nation of Israel and the entire world.