HomeDevotionalsWhat does the bible say about animals in our care.

When God first made animals, He placed them in the Garden of Eden under the watchful care of Adam and Eve (Genesis 1:26, 28). As such, they weren’t food, but creations to be ruled over – which means protected and managed.

Notice also that animals were created before humans, and they were created to be fruitful and multiply. As caretakers, Adam named the animals and together with Eve they were to tend to the plants so that all living beings – animals included – had food to eat.

Animals and the plants around them were, if you will, companions and a pastime. It is every Christian’s duty to make sure that all animals are treated humanely and with respect. 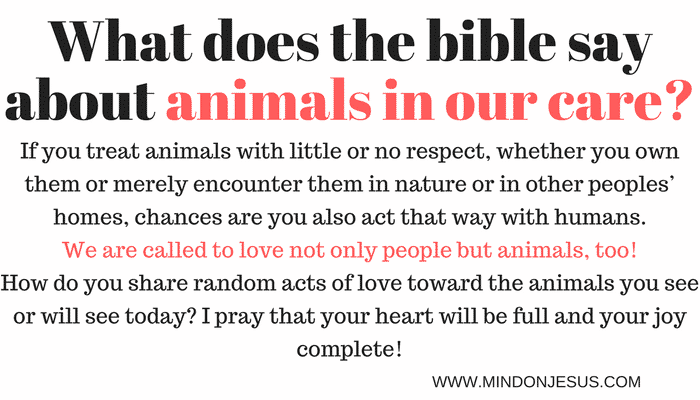 Once sin was introduced after Eve and Adam’s disobedience, the first animals were sacrificed in order to clothe them from their nakedness (Genesis 3:21) before God sent them out of the Garden to live into the world that had been changed.

This changed world forced them to work for their food, which required tilling the ground and raising livestock. Thus were the very occupations of the offspring of Adam and Eve – Cain the farmer, Abel the shepherd.

They were familiar with animal sacrifices offered up to God, but not for their own consumption. It was only after the great Flood in Noah’s days did God grant mankind to kill animals for food as needed for survival (see Genesis 9:1-17).

When we look throughout the Old Testament, shepherding became so common an occupation that it was used by God as a metaphor that the people could relate to in terms of how He cared for them and wanted to keep them from the wolves (evil ones) who could lead them astray.

Such tender, loving care was then repeated in the way Jesus lived and appealed to mankind to flock to Him for life and instruction.

Of all these mentions, the most compelling takeaway is that animals were valued. Even as tamed creatures (James 3:7), they weren’t just a means by which ancient people used their skins, organs, or meat, but were primarily regarded as living creatures who were as much a part of God’s holy creations as humans.

Their secondary purposes as food sources and sacrifices, though important, were not something the Lord took lightly. He made it clear that animal sacrifice served a purpose (the act of killing ingrained in their consciences to prevent them from returning to their sins), until Jesus’ death, resurrection, and ascension, at which point killing animals for sacrifice (not consumption) became wrong and unnecessary.

Loving animals in our care

In many ancient and modern cultures, animals are revered, and many who are vegetarians or vegans remain devoted to not harming animals or consuming them and their byproducts. However, a good part of today’s society relies on animal farming and hunting, and not everyone in that occupation treats animals with the same sort of loving care and kindness that Adam and Eve would have done!

Even people who have animals as pets don’t treat them nicely. Instead, we see so much violence being done to animals, especially among people obsessed with killing and torture who use such acts as a gateway to “moving on” to humans.

As gruesome a topic as that is to discuss, it’s not without reason. We are called to love not only people but animals, too! And while not everyone is called to become a veterinarian, those who are, serve a vital role in ensuring animals both domesticated and wild can lead healthy lives for as long as they are on the earth.

I realize that everyone has a different opinion of the perfect pet, and not everyone is called to have one, and but treating any animal with kindness does say a lot about a person’s character. If you treat animals with little or no respect, whether you own them or merely encounter them in nature or in other peoples’ homes, chances are you also act that way with humans.

If you can lose your temper on a poor, and sometimes defenceless, animal, who’s to say you won’t react that way to anyone or anything that crosses paths with you? There is truth about living the golden rule: treat others as you would want to be treated!

We live in scary times, where love can be disregarded as optional at best. How it must break the heart of God to see the senseless bloodshed that runs rampant throughout the earth He created!

Abuse comes in many forms, and it’s so very sad to think that humans aren’t the only victims, but animals are too. But that’s what happens in a selfish world where people are mainly bothered about catering to themselves.

It’s a good warning to those of us who claim to seek the heart of God to be vigilant in how we approach and care for animals.

Animals constantly teach us about the world in which we live. Did you know that animal-lovers experience the following benefits when they bond or interact with animals?

In addition to those boosts to your mental and physical being, if you have a pet of your own, it provides you with companionship to help combat loneliness. When you curl up on the couch after a long day at work and your cat decides to climb up on your lap, you instantly feel at peace.

As you walk your dog, you can get some fresh air while striking up conversations with perfect strangers, and gain new friends in the process. You can connect with other pet-owners for whatever type of pet you have, and swap stories and information that could help you in knowing how to improve your pet’s life.

But speaking of saving lives, pets can also provide us protection or assistance. Service animals, guard dogs, and those trained to work in military or law enforcement are highly valued for what they can do.

In return, these and all other pets need our trust and respect, which can truly only be earned when we can love them, not make them fear us.

How do you share random acts of love toward the animals you see or will see today? I pray that your heart will be full and your joy complete!